Excerpt from Chapter 35: Rose is Still a Rose 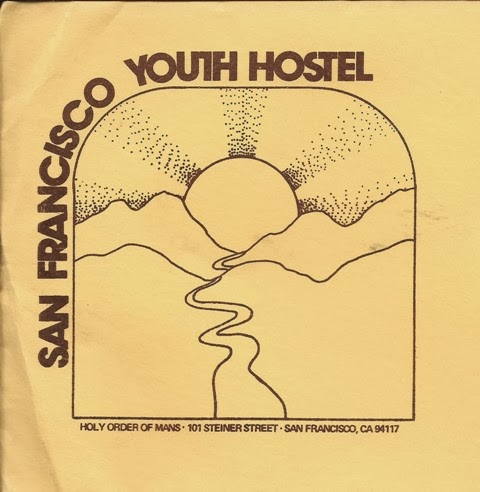 Progress is going well on "Tapes" with completion of over 200 pages. My goal is to include photos and artifacts from our journey, some of which are extremely unique as some of the sites are no longer in existance.
The following excerpt is from Chapter 35 and tells of some of the experiences during our time at The Holy Order of Mans  (HOOM) Youth Hostel on Steiner St. in San Francisco. Jan and I stayed there for extended periods on two separate occasions during our travels that spring.


'I looked over at Marcel, and then down at the various Animals LPs in his hands and noticed he bore a remarkable resemblance to Eric Burden, the band’s lead singer. Since our first introduction, Marcel had reminded me of Moe from “The Three Stooges”. At that moment, I realized I’d had him pegged wrong from the beginning, and told him so.
I don’t think he appreciated being teased.
We split up shortly after that point, with Marcel remaining behind. Jan, Doug and I got a lift from a man in a pick-up truck. When asked where we were headed, we instructed the driver to drop us off at the wharf. I still wasn’t feeling up to snuff but I figured that the salt-water air, boring deep into my lungs had to have been at least about half as restorative as a day’s rest in bed. Anyway, I didn’t have a choice in the matter; the hostel was off limits during the day unless you were at death’s door.
I wasn’t – not yet anyway.
By the time we'd been delivered back at the hostel late in the afternoon, my sore throat had turned into a cold. I didn’t pay it any mind – with any luck; I’d shake it as long as I stuck to ginger ale, and a healthy diet.
What a laugh. Our stingy diet couldn’t get much healthier.
Despite my aching body, I had a feeling of well being when setting foot in the door at Steiner St. that afternoon. I couldn’t quite put my finger on it, but if I’d learned anything since coming away, it was to live in the moment and revel in the nebulous blush.
Carpe diem.
Experience teaches that serendipitous sparks are few and far between, when one comes along, you reach out and grab a hold of it. Eventually, it will dissipate and this one did too, but while it lasted, I felt warmth in the core of my stomach, that spread upward throughout my body, filling every crevice until it finally subsided, leaving me with a redefined awareness of the difference between contentment and joy.
A metamorphosis was taking place inside of me and I felt it was for the better.
Marcel was waiting for us upon our return, all dressed up with somewhere to go. Evidently, after we left him back on Telegraph Avenue, he’d met a voman – details about her whereabouts or any physical description were not disclosed. I didn’t say it out loud, but I was curious if Marcel’s “voman” in question was a streetwalker. Not that it was any of my business, nor did I care, but he clearly made a point of letting us know he’d met a female and bragged that he was planning to hook up with her again later that evening.
She might have even been a phantom.
It occurred to me that it was quite possible Marcel was trying to make Jan jealous because she’d turned down his premature marriage proposal.
While passing an hour or so until mealtime, dressed in wool pants and a buttoned-down shirt, Marcel joined a small gang of us in the park to play a pick-up game of softball until he split the crotch of his pants and asked Jan if she’d mend them for him. This was the second time he’d made the request to Jan in less than a week. I didn’t want to rain on her parade, but I was certain he was very capable of sewing his pants himself. If the shoe had been on the other foot however, I probably would have raced around to track down the closest needle and thread, and gone right to work.
During dinner, Marcel and one of the other girls at the hostel had a contest to see who could draw more skillfully. Marcel made the greater impact within the group with his artistic dexterity when he set about to draw a pencil portrait of Jan. His depiction of her features and hair was extremely accurate.
Jan was flattered beyond compare but she still wouldn’t budge on the marriage proposal deal.
No one could accuse our Swiss compadre of lacking in the persistence department.'