Excerpt from Chapter 21: Finding Our Place in Space 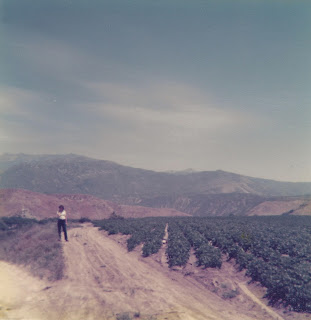 The following excerpt is from Chapter 21: "Finding Our Place in Space."

'After the Gregory incident, sleep that night was fitful and sparse. It didn’t matter. If we wanted to be in Hemet by late afternoon, we had to get up early and walk to the terminal a few miles away from the men’s Y to catch the 12:15pm bus. At this rate, Jan and I were reluctant to hitchhike and take a chance on another stranger. Gregory's crushing blows against our door was as if someone had taken his boots to our emotional well-being. The last thing we wanted to do that morning was put ourselves at more risk. The bus would take us from San Diego to Riverside; then we'd need to transfer onto another bus out to Hemet. Our only regret was not getting over to explore Old Town, a part of San Diego where we had planned to spend our final day. With the trek ahead, so much for foiled plans, Old Town would have to wait.
This excursion was not going to be cheap, about ten dollars total -- we hoped beyond hope our decision to skedaddle would be worth the investment. Arriving at the depot a couple of hours ahead of schedule, we stuffed bags into a locker to conserve our backs while waiting around. To pass time we read, and watched people come and go. Before we knew it, it was time to board.
The bus pulled out of the terminal -- on schedule. Heading east from San Diego, Jan and I were two giggly friends again, excited to leave the city and our worries back at the men’s Y, with the junkies and the ex-cons. Our ride would be almost two and a half hours. Feeling fatigued from the crazy night we’d endured and the long walk to the terminal in the blazing heat that morning, we took turns dozing along the way. Once we arrived at the Riverside station, there was another hour to spare before the last bus left the station for the desert at half past three.
The mid-afternoon sun high in the sky, I was completely overdressed in a pair of green cords, work boots, and a long-sleeved, pale blue peasant blouse. Since leaving Val and Phyl’s earlier in the week we were running out of clean clothes and would need to find a Laundromat once we got settled in at the hostel.
The distance between Riverside and Hemet wasn’t far, approximately thirty-six miles. Traveling on an old beat up school bus, the ride was far longer than it would have been had we good road conditions. As our bus crawled up and around the dusty dirt roads at a snail’s pace, with only five other passengers on board, I expected Rod Serling to announce we’d crossed over the threshold from reality into a void called “The Twilight Zone.” It wasn’t that bad actually, but it did occur to me what would happen if the bus was to break down in the middle of the desert. Jan entertained the same concern, but we tried not to think about it and sat back to enjoy the ride.
This was a piece of cake after the Gregory fiasco.

The temperature in Hemet that May afternoon was an extreme 102 degrees and counting when we pulled into the terminal close to five o'clock. A change of clothes was in order but our journey wasn’t over yet. We hadn't reached the Meadowlark hostel a couple of miles outside of town in Valle Vista. Hotter than hell, according to AAA, there were no buses going out Valle Vista way.
It figured.
After a detour at Robert’s Health Food Store where a nice girl offered us a couple of glasses of water, Jan and I walked up the road a ways and stuck out our thumbs. For a long hour, vehicles few and far between roared by without giving us a look. If we hadn’t had a sleepless night or been up at the crack of dawn hustling our asses to the bus depot, we might have considered hiking to the hostel. In the dry, oppressive heat, however, walking was out of the question. The possibility of sunstroke was on both of our minds.
There was a gas station just ahead at the corner. Surely, someone there might suggest a way for us to get to Meadowlark or drive us for a small fee. Since Jan was relegated to call down to the front desk to dispose of Gregory the night before, it was my turn to ask for a favor.
While she waited outside, I entered the gas depot and approached an elderly man seated on a stool reading a newspaper. Sitting comfortably in his faded denims and white undershirt marked by yellow sweat stains it was clear his itinerary was open. When I approached him, the man looked up, obviously recognizing I wasn’t from the area.
“Can I help you?” He told me he was the proprietor of the station. I explained how we'd journeyed from San Diego earlier in the day and arrived in Hemet from Riverside an hour ago, telling him we needed a ride out to Valle Vista where the Meadowlark youth hostel was located. I asked the man if he had a car or access to one would he consider doing the honors and drive us over there.
The stranger looked at me with raised eyebrows when I mentioned the part about our planning to stay at a hostel in Valle Vista. He knew Valle Vista, but he didn’t know of a hostel anywhere in the Hemet region. I pointed to the photo of the place in the guidebook and he frowned, still puzzled about its existence. Sure enough, he asked me to follow him out to his car. When we stepped outside of the station, I introduced the man to Jan. Tickled that our scheme had worked I thought it best not to tell her we might be getting a ride out to a mirage in the middle of the desert.
Double-checking the address, we drove down the road a ways until pulling up to the front gate of the Meadowlark property situated on a few acres of land, with several buildings scattered about. Supposedly the hostel was situated somewhere within the grounds.
At first look, it appeared that no one was around. The man waited in his car while we walked up to the front door of the main house and knocked. No answer. Then we ventured around to the side door of one of the smaller buildings and discovered an office where a young man was seated inside. Above his desk, a sign read “$2.00 /nite.” Jan and I were about to pay when we were informed the hostel wasn’t officially open yet for business. Not until summer.
Gravely disappointed, we groaned. The young man had an idea. Since we'd traveled a distance to get there, we could stay, as long as we didn’t mind sleeping out in the horses stables.
We sure didn’t.
Returning to the car, we thanked our gas station friend for the lift and went back inside the office to pay for a couple of nights. The young man then proceeded to bring us back around to the animal stables where the temperature was at least fifteen degrees cooler. Three horses and one colt were housed in the stables. It felt good to get out of the sun and be in the company of a few furry creatures. Finally, we were able to lay down our packs, rest our legs and tired bodies.
Not far from the premises, a small grocery store stocked fruits and vegetables, and other inexpensive food items for supper.Things were starting to turn around. Little did we know that Meadowlark was much more than a youth hostel.'
1976: Tapes from California © 2013 Jill C. Nelson