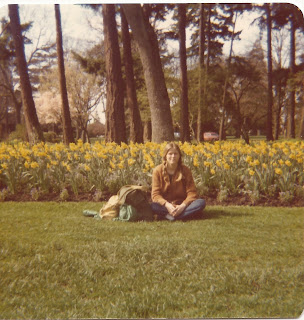 Chapter 40 excerpt: Chaos Leads to Order
'Restless and bored, Jan and I watched brightly coloured sailboats chase one another out on the water. Deciding to head back by bus, it would be nearly five when I reached the hostel – the appropriate time to return to the bubble.
Jan would catch up later.

Without vocalizing it, almost telepathically, an underlying need for space had been established. To allow one another room to breathe, Jan and I recognized the time had come to slacken things. Perceptibly and emotionally, my friend wanted to stay at arm’s length, at least until I made my decision. In my gut, I felt a shift was imminent. I simply could not go on much longer agonizing about what to do about my immediate future.

Something hit me that morning during services at Cole Street. Apart from a measure of familiarity with the Brothers, Sisters, and few of the novices at HOOM, I knew very little about the Holy Order of Mans organization. Though I’d leafed through a copy of The Golden Force, the group’s practices, procedures and faith origins eluded me. Designed to enlighten, I knew that certain segments of the book were crafted to flatter supporters and impress colleagues while goading outsiders into believing that HOOM members were part of a private and elite supernatural society. Knowledge of the Order was shaped from what had been told to me by partisan members.
This wasn’t acceptable.

Even Brother John reminded me not to get sucked in by other people’s opinions.
Mystifying me, I hadn’t given The Golden Force a fair trial and intended to read it whole.

My pragmatic self-resonating, since all of this wavering began,, I might be contemplating enlisting for some freakazoid show after all, just like the Moonies – a group capable and culpable of harvesting brains on loan. In all fairness, the possibility couldn’t be disregarded.

Riding the trolley up hill, I hopped the bus for the final stretch of the ride to Steiner Street. Playing it safe, I dawdled in Duboce Park where Jan, Beth and I’d held our private party two nights previous.

A couple of HOOM kids I hadn’t met before crouched on their hands and knees, worked the soil garden next to the hostel. Spotting me, they meandered over. The female, Rebecca, made a formal introduction. Timidly, Thomas held out a violet flower picked from a sweet pea plant.
Would I like to have it?
Thanking him, I accepted and waited to see if something would transpire.

In recent days, veterans and new members of the Holy Order seemed to scope the hostel and its hinges like ants. In case there might be reason for it, I kept my ear to the ground. As I’d discovered with Joanne earlier, in all probability, Rebecca and Thomas were merely being friendly.
HOOM folks might be the appendages of a cult, but so far, instincts told me they were trustworthy.

A slight, cherub-faced girl with blue-grey eyes, Rebecca’s demeanor was gentle, kind. Early into her career as a novice, the 18-year-old worked part time on Clement Street at a fruit shake bar called Haven. I couldn’t resist asking Rebecca why she’d decided to join the Order.

Having come from a troubled background, Rebecca admitted she was seeking love and stability in her life. An instinctually spiritual person, the novice had a close friend that recently became a Sister of the San Francisco chapter. In turn, the friend invited Rebecca to attend some of HOOM’s meetings. Upon completing reading The Golden Force, Rebecca asserted its message and accounts spoke to her in a way that she had never before known. Believing HOOM to be her calling, Rebecca was convicted, yet conceded the choice she made wouldn’t necessarily be what others might choose.

Thomas and Rebecca left the garden to head over to Safeway, leaving me alone with my thoughts. Did a definitive answer really did exist in the galaxies somewhere? I felt asinine believing there might be a remote possibility.

“So… are you going before the council?”

I swerved my head around. There stood the Good Samaritan, proudly, as if he knew something I didn’t. For a smartass second, I thought about sniping, who wants to know? And decided against it.

“Oh… Is that it?” Obviously, my fence sitting was a topic of conversation in a certain neck of the woods. Inspecting my chest, Teddy grinned. “I’m glad to see the jacket is keeping you warm.” Casting my eyes down the front of the green kangaroo, I felt the wind kick up as it often did late in the afternoon, and was happy to be zipped inside of the coat.

“Thanks again for letting me use your jacket. It’s real cozy. I don’t feel right keeping it though. Are you sure I couldn’t buy it from you?”

When I started to gripe, Teddy mimicked my complaint. Then, as if remembering something, without saying a word, he got up, darted across the street and ran toward the manse.

I watched the Good Samaritan pose precariously on one foot on the front porch, the house where he now resided full time. Apparent that something was on his mind, in less than thirty seconds, Teddy turned on his heel and zoomed back. Straightforward, he pressed again, “So you’re not going before the council?”

“The council? Um…No, not yet. Actually… I didn’t realize there was a council.” Unsure about sharing the extent of my indecisiveness, and wishing that Teddy would say something to convince me to stay, I stated flatly. “Jan and I hope to leave the city in a couple of days.” As if studying the outcome of a science experiment, The Good Samaritan narrowed his eyes. “Have you got a pack and everything?”

I sure did. The thing was starting to weigh like a 100 pound anvil. Uncertain where this conversation was going, I nodded. “Yeah.”

“So are you going north?”

“Eventually, yeah. Back to Canada… But not home right away. Why?”

Firing skinny arms and spider-like hands into the air like a rocket, Teddy replied. “The reason I ask is because I’ve got a really good pack and I’ll give it to you. I know you don’t have much in the way of travel necessities.”

Slack-mouthed, I stared back at him. “Give? As in for free?” I blinked hard. “I couldn’t accept your backpack…. unless you’d consider selling it. I don’t have much money, but I could write you an ‘I owe you…’”

There was positively no way in hell I was going to sponge Teddy’s pack, even if the prospect of having the Good Samaritan’s backpack for keeps was unfathomable. I had seen it once, weeks before. Black and grey, the oval shaped nylon sack had a couple of literary quotes written across it in dark marker. White gardenias were fastened to the zipper by a bungee cord.
Teddy’s bag was amazing. Jan and I were both wholly impressed.

“Well, thanks.” I felt my face glow beat red. “I’ll think about it.” Faking that I’d never seen the pack, apparently up for grabs, I continued to play dumb, “What’s it like, anyway?”

Expecting to be regaled with an incredible story attached to the origins of the knapsack, I sat back and waited for Teddy to elucidate about his pack’s history. What he divulged wasn’t an elaborate tale at all. Quite the opposite. In taciturn voice, he contended, “Oh, it’s been very good, very loyal.”

As if I needed convincing, the Good Samaritan was quick to reassure. “It’s a beautiful pack. There’s not another one like it.” Like dew coating a meadow at dawn, past years and memories flashed briefly across his wistful blue eyes. “It took ten years for me to build it up to what it is today, you know," he said. "I don’t take giving it away lightly.”

Teddy’s emotional attachment to his beloved backpack suggested a parent crowing over a growing child, reticent to let him loose to the world, yet believing it a necessary measure for personal growth.
When we’d first met him, Teddy talked of living out of his backpack for four years after leaving Vietnam and his ex-wife behind, spending weeks surviving in the desert before coming to San Francisco. His knapsack represented friendship, faithfulness, devotion. It was his second skin. What Teddy had withheld about the pack was the beef of the story.
I’d have to imagine the rest.

We broke into a little comedy skit: The Good Samaritan offering me his pack – my refusal unless I could pay. Struck by the absurdity of going around in circles, like an Abbott and Costello routine, we both started to laugh. Before I knew it, it was time to break up the party. Starting toward the manse, the Good Samaritan halted. Then he turned and looked me up and down. “So, you’ll be here for another day or so?”

Reaching both hands upward, I pulled my long, thick hair to the back of my head, formed it in to a ponytail and smiled flirtatious. “I think so, yeah.” Dipping his head in courteous fashion, Teddy broke away and ran across the street. Reaching the lower steps of the manse porch, he performed a tap dance on each cement block until finally touching down softly on the verandah. I
f I hadn’t been awestruck before, now I was money in the bank.'