Excerpt from Chapter 6: Riding on the Walter Express - Round One 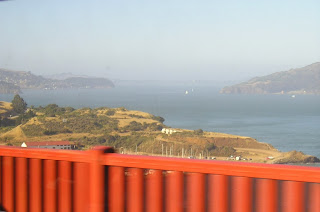 The following excerpt from Chapter 6 details our first attempt at crossing the border into the U.S.
'Toting our backpacks behind us, we climbed on the Burrard St. bus and pulled away slowly from the curb. Soon we clicked along the highway toward Walter’s friend’s home located in the east end of the city. Upon our arrival, we counted three boys and two girls and waited for the rest in our group to land in before getting loaded up to go. Walter, a sketchy looking, fiftyish German man with three days worth of stubble, exuded occasional wafts of body odor but at least he was affable and laid back. His van was a standard-sized shaggin’ wagon, nothing out of the ordinary for the mid-seventies. If all of the seats hadn't been hauled out excluding the front Captain’s chairs, the vehicle would have seated six comfortably. Right away, it became obvious that the majority of us were going to be sitting on the hard metal floor in the back of the van for the duration of our eighteen-hour road trip with a few blankets strewn around the interior. It would be like riding in the back of a U-Haul truck for a thousand miles – a fair deal for 25 bucks. As more kids started to pull up in cars and on bikes to the house, we counted eleven, seven men and four women, including our driver. This would be one hell of a ride.
While backing out of the driveway, two new male friends, “Curly” and “Ponytail,” shifted over to where we’d skillfully made a couple of tiny spots to sit, and we happily proceeded to engage in conversation with them consisting mainly of “Where are you from and why are you going to San Francisco?” all the way to the Washington State border crossing. It had been predetermined before we left that the only person worthy of claiming the Captain’s chair next to ole Walter was Cathy, who offered to relieve Walter of his chauffeur services whenever he got too tired to drive. Little did we know on our virgin run that Walter had liked to drink and pop amphetamines during long roadies and he would become too drunk to drive just barely outside of the country.
The trip to the border was approximately sixty miles and considering we were eleven people squished into a battered van with no seats or seatbelts, we cruised along making great speed until we ended up in queue at the Peace Arch border. It was the tail end of the morning rush hour traffic and the line of cars, trucks and vans was lengthy which created a bit of friction inside the van with people needing to pee after downing cups of early morning coffee. Some of our gang got out and walked around until border officials corralled them back inside. We finished the lunches we’d packed which helped to pass time, and I held my bladder as we edged closer to the gate, figuring I’d be able to pee in the U.S., now just a stone’s throw over the border. In those days, passports weren’t required when traveling between the sister counties – a birth certificate would suffice and Walter collected them one by one from our motley crew, some Canadian, some American, as we joked about being pressurized together for the next seventeen hours in a smelly van. As teenagers, there were far nastier things to suffer through.
When it was our turn to pull up to speak to the border official, ever so cautiously, Walter rolled down the window patiently anticipating how he would appropriately respond pending the official’s queries about the large number of guests, in tow. Requested to step out of the van in single file, we did so, and kept our mouths shut unless spoken to as we’d been programmed to do by Walter while waiting our turn. Despite what many would consider at first glance an unruly gang with unkempt hair and curious clothes, uniformly, we were a friendly, polite bunch, quick to appease the death stare of the officials so we could get back on the road and to our destination. It seemed however, there was a problem with the information on one of our birth certificates. Walter was waved over to the official to be scrutinized a little more closely. After about a minute, the man in the booth glanced in Jan’s direction beckoning her.
“Come on over here.” The officer hadn't meant to sound abrupt. With her short brown hair, and freckles, Jan, red-faced for being centered out, suddenly looked about 14 as if she’d been scolded by a sour teacher. She approached the booth slowly while attempting to conceal her fears. The intimidating official stared her down.
“Do you have a note from your parents?” His question fired like a bullet. Not realizing that she required a note from her parents to travel at the ripe age of barely 17, she shook her head.
"Are you able to obtain one?” Obtaining one certainly one wouldn’t be a problem, but it would require some time - in all likelihood, days.
“Yes,” she responded meekly. “Why?”
“You’re under 18 and unless you have written parental consent to travel in to the United States, I can’t permit you to go.”
Walter tried to intervene, as did I, and some of the other kids on the trip, specifically Curly who assured the officer that he would watch out for Jan. No go. It was a matter of guardianship and if we’d done our homework prior to our departure from Vancouver, we would have discovered that at 18, I could have vouched for Jan as her personal caretaker. Stupidly, we were unaware.'